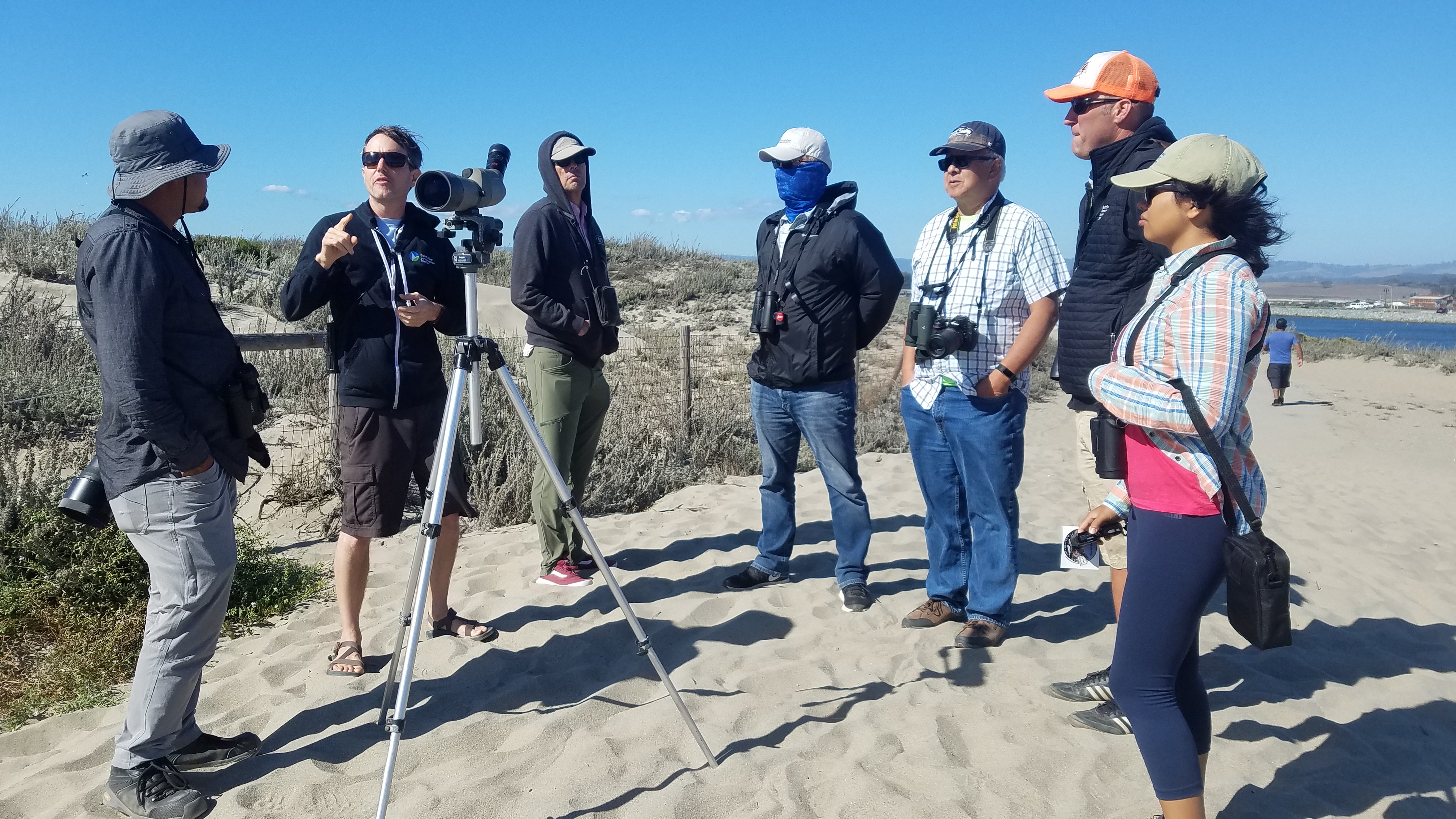 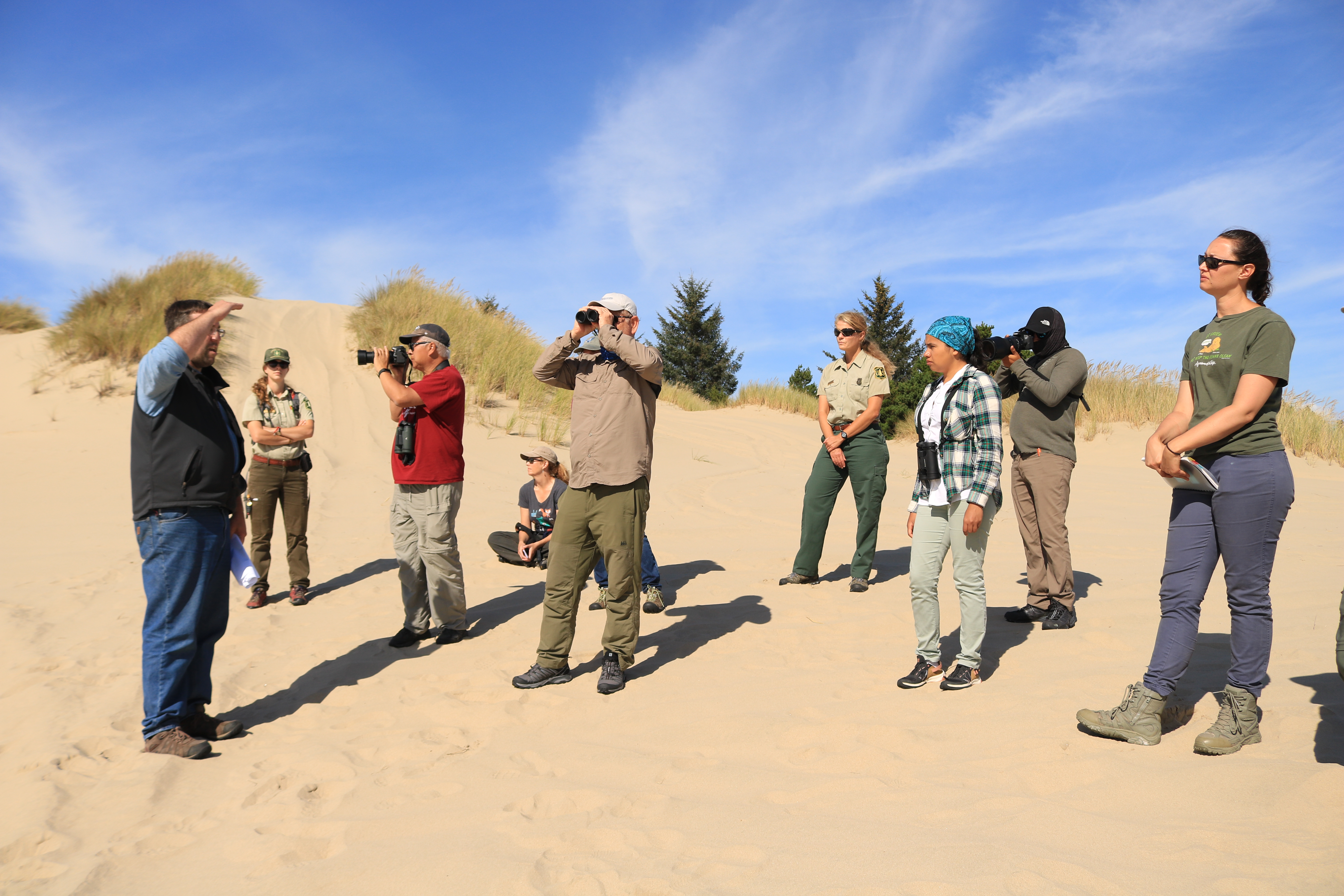 From September 8 to 13 Leslie Ponce de León, along with two more Cornell Lab Coastal Solutions Fellows Program, and Liliana Ortiz, from Pro Esteros, visited different shorebird conservation areas in the states of California and Oregon in the U.S. The objective of the trip was to learn about the conservation, restoration and management strategies of coastal habitats associated with migratory shorebirds that nest in the different sites. James Chu of the United States Forest Service’s international program and member of the advisory council of the Coastal Solutions Program has been in charge of organizing this trip and contacting the host institutions of the neighboring country.

In Monterey Bay, California, we were met by the director of conservation of Point Blue Conservation Science, Catherine Hickey, who along with her team and other collaborators shared information about the management of human disturbance in relation to species such as sea otters, the Black Oystercatcher (Haematopus bachmani) and the Snowy Plover (Charadrius nivosus). Then we visited the Monterey Bay Aquarium, where there is an area equipped for shorebirds with species such as the Ruddy Turnstone (Arenaria interpres), the Black-necked Stilt (Himantopus mexicanus), the Black-billed Plover (Pluvialis squatarola), the Marbled Godwit (Limosa fedoa), among others.

On the third day we learned about the restoration work of estuaries and coastal dunes where the Ice Plant (Carpobrotus edulis), an invasive fleshy plant from South Africa, was extensively planted during the last century causing the erosion of the beach by forming a thick carpet that holds the sand in place and when storm waves hit them the dunes are eroded, thus causing the destruction of the habitat of shorebirds. For this reason restoration work has focused on the eradication of the ice plant and reforestation with native species, promoting embryonic dunes, allowing their stability and at the same time allowing them to be dynamic with the wind and waves, obtaining good results and promoting the use of these sites by the birds that nest there such as the Snowy Plover.

Once in Florence, Oregon, we were met by Deanna Williams, a biologist from the US Forest Service and hostess in that state, who took us to the Siuslaw National Forest and the Cape Perpetua Visitor Center where they explained us about the management of the forest, as well as the infrastructure that they have for the development of recreational and conservation activities.

Finally, on the last day of the trip, we visited Joaquin Miller State Park, a place where recreational activities coexist, such as off-road vehicles that pass through certain areas and the areas destined for the nesting of the Snowy Plover. This site is managed by the Forest Service and other agencies such as the Department of Agriculture for the removal of European grass, which causes an excessive accretion in the dunes preventing the growth of native species and the use of these areas by shorebirds that breed.

Thanks to the experiences shared during the tour, we can implement conservation actions in places such as the San Quintin Bay and the Punta Banda Estuary. We thank the Coastal Solutions Program, the United States Forest Service, Point Blue Conservation Science and all those who supported and made this experience possible.